A MESSAGE FROM GRAHAM TAYLOR, OUR PATRON, AS HE HEADS OFF TO THE WORLD CUP

KitAid – – World Cup. Three into one makes for a fantastic opportunity to see the top footballers in the world, playing in a country hosting the tournament for the first time, whilst not forgetting there is a poverty level that needs support and encouragement.
KitAid does that by a regular supply of football kit donated from all over . To see the smiles on the faces of so many youngsters is like winning the equivalent of the World Cup!
Graham Taylor
Posted by Sally Howe at 01:06 No comments:

BEST WISHES TO JULIA WHO'S OFF TO SOUTH AFRICA 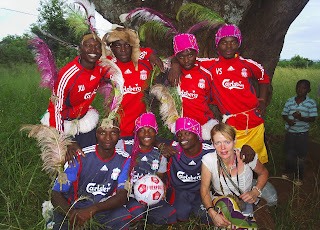 Julia, one of KitAid's trustees, is heading off to the World Cup next week as a volunteer throughout the tournament.
We've donated a football ticket to Joseph, a South African who lives in one of the poor townships in Jo burg (called OrangeFarm) to join her at the England v USA match. Joseph has helped Julia distribute kit to Orange Farm schools. Joe , like eveyone else in the townships has no money for extras in life. So this will be fab for him. He is aged about 45 has never ever been to a match but knows everything about football and plays himself. He works hard supporting his wife, 3 kids and grandchild in his small ghetto home.
Enjoy the football Joseph and thanks for your help over the years.
Posted by KitAid blogger at 12:42 No comments: 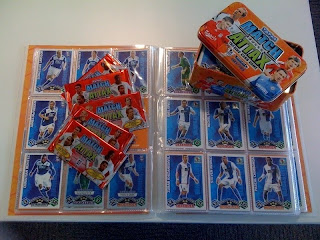 We're collecting Match Attax cards to batch up and take with us to Kenya. The children love them, so if you've got a few spares and want to to see the put to good use, send them to KitAid, c/o Veolia Water, Tamblin Way, Hatfield, Herts.
Be quick - we're leaving on the 6 June.
Posted by KitAid blogger at 12:32 No comments: 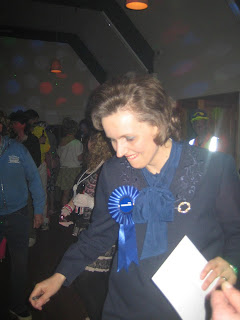 Many thanks from Suzanne Williams from Matlock who recently reached her milestone birthday and celebrated in style with an 80s themed party in aid of KitAid. A large amount of kit (mainly Derby County shirts!) and £250 was donated on the night. So a big thank you to Suzanne or is it Maggie?
Posted by KitAid blogger at 01:23 No comments:

TEAM GETS READY TO GO TO KENYA 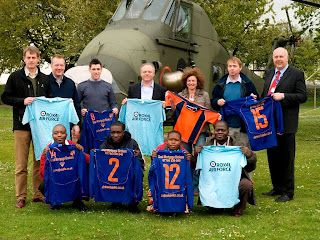 Members of KitAid (Derrick Williams and Sally Howe) joined Squadron Leader, Neil Hope; Aircraftsman, Ben Burton and Mark Robson, from the Sir Bobby Robson Foundation prior to their trip to Kenya.  The team will be distributing shirts from the 12 boxes of kits already delivered to Warrant Officer Wayne Charley at the British High Commission in Nairobi. Another six boxes are currently making their way to the Kenyan capital.

Travelling with the group is local teacher Dave Queen, from Thomas Adams school in Wem. Dave looks after a school link with Miriu school in Kenya.   Also present at the Shawbury visit was the Headmaster of Thomas Adams School, Neil Hemmings and members of staff and students from Miriu School in Kenya. The quartet, teachers, Joseph Odhong and Kenedy Ochola and students, Edwin Otieno Juma and Millicent achieng Odera are currently in England from Miriu school visiting the Wem school, who provide much needed aid and sponsorship to the Kenyan youngsters.
Posted by Sally Howe at 21:00 No comments: 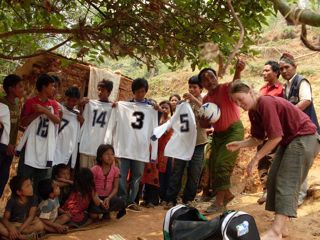 Just heard from Jolana Whyte, who is currently working on a project in Nepal.  KitAid donated kits which have been donated to the Youth Club of Aandhimul village and Bandipur.

Jolana writes: "The political situation this month has been very difficult and the country has been on stand still, no transport, no shops all shut for 6 days and there are further strikes expected. As the streets got quieter they got filled with children playing football, cricket and badminton, lifting the heavy mood of the country".
Posted by Sally Howe at 21:00 No comments:

Welcome to Tim Lamb, Chairman of the Bishops Stortford Supporters Club, who has just volunteered to become KitAid's Regional Coordinator for the Herts/Essex border area.
Posted by Sally Howe at 18:47 No comments:

KITAID JOINS FORCES WITH THE FORCES 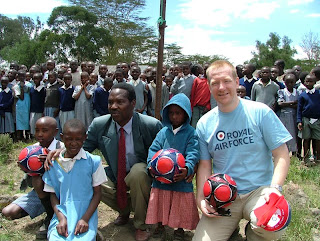 KitAid joins forces with RAF Shawbury and the 'Taking Football to Africa and beyond' to send football kits to Kenya.

The appeal, which is run by the Station Community Relations Officer, Squadron Leader Neil Hope, collects football shirts and school uniforms from donors across the country and re-distributes them to the needy worldwide.

Neil will be joined by on his trip to Kenya by Sally Howe and Derrick Williams, Trustee and Founder of  KitAid and Mark Robson from the Sir Bobby Robson Foundation; Dave Queen from Thomas Adams School in Wem, who looks after the school link with Miriu school in Kenya and Senior Aircraftsmen Ben Burton, who assists Neil with the appeal.

Many of the football shirts already in Kenya were from the donation through the Sir Bobby Robson Foundation of Newcastle United shirts left at St James Park to commemorate the life of Sir Bobby Robson, Mark's father. To date the appeal has now delivered 24,500 items, including 12,089 shirts to 27 countries worldwide. Donations are continuing to arrive at RAF Shawbury.
Posted by Sally Howe at 18:23 No comments:

OUR VOLUNTEER PACKERS BREAK A RECORD

Once a month on a Saturday KitAid volunteers give up their warm beds to sort and box up hundreds of donated kits.  Each session we get faster, pack more boxes and today we found a home for 64 boxes of kit which will all soon be on their way to Somalia, Tanzania, Uganda, Kenya, Iraq, Zanzibar and South Africa. Quite amazing when you think we did all of that in less than 3 hours and we will make 2,500 people very happy!
Well done packers!
Posted by Sally Howe at 10:36 No comments: